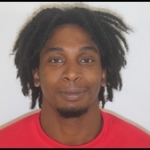 Robinson was arrested at a residence on the 2100 block of Gamble Street.

The child died on Oct. 27. Three days later SCMPD, the Department of Family and Children Services (DFACS) and the Chatham County Coroner’s Office initiated a suspicious death investigation following an autopsy by the Georgia Bureau of Investigation’s Medical Examiner’s Office.

Robinson, who was the live-in boyfriend of the victim’s mother at the time of death, attempted suicide after being questioned by police on Oct. 29.

Siblings of the victim, ages seven, five and three, were removed from their residence by DFACS. Robinson is also being investigated for criminal acts against the victim’s three-year-old sibling.