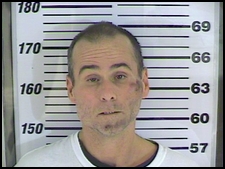 SAVANNAH, GA (January 25, 2013):  A 47-year-old homeless man with a history as a sex offender is back in custody after attacking several officers at a Downtown hotel.

Franklin Joseph Alexander punched or head-butted three Savannah-Chatham Metro Police Department officers and a Georgia State trooper whose gun he had taken before his arrest Saturday.

He has been charged with aggravated assault, two felony and one misdemeanor count of obstruction of a law enforcement officer, interference with government property, possession of a firearm during the commission of a crime and criminal trespass.

The trooper was working off-duty at the hotel when he noticed Alexander in the lobby looking at pornography on a hotel computer and ordered him to leave.

Instead, Alexander struck the trooper and took his service firearm, which was secured by a bystander while the officer and suspect struggled.

Downtown Precinct patrol officers arrived to aid the trooper and were punched as well and one received a head butt while attempting to place handcuffs on Alexander.

After his arrest, Franklin told officers he would have shot the trooper.

Franklin has a history of arrests by SCMPD since his release from Valdosta State Prison in August 2011. He had served two years of an 8-year sentence for sexual exploitation of a child.