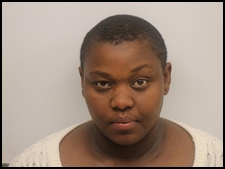 SAVANNAH, GA (March 8, 2016): Savannah-Chatham Metropolitan Police Department Downtown Precinct officers responded to a report of larceny and an abandoned infant at approximately 5:30 p.m., March 7, at a grocery store in the 300 block of East Gwinnett Street.

Upon arrival, Metro officers learned Iesha Reed, 31, who had been previously banned from the business, left behind an infant she was watching when she fled the scene.

A Department of Family and Children Services agent responded to care for the infant, who was later returned to his mother.

The incident is currently under investigation. Arrest warrants are currently pending for Reed, who is described as a black female, 5-foot, 2-inches, and approximately 200 pounds.

Anyone with additional information on this incident should call CrimeStoppers at (912) 234-2020 or text CRIMES (274637) using the keyword CSTOP2020. Tipsters remain anonymous and may qualify for a cash reward.