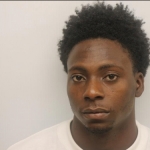 UPDATE: Tuesday afternoon, Jakeem Lawton, 24, turned himself in to SCMPD at approximately 3 p.m. Lawton was wanted in connection to the Emerald Drive shooting that injured Maurice Bush, 22 on Sep. 7 of last year.

Lawton was transported to the Chatham County Detention Center without incident. He is charged with one count of aggravated assault and one count of possession of a firearm during commission of a crime.

Just before 1:00 a.m. police responded to a “shots fired” call at Ohio Ave. and 36th Street lane. Minutes later, officers were notified by Memorial University Medical Center when a man showed up with a gunshot wound to the leg. The victim is Richard Ferguson, 29.

Just before 4:00 a.m. officers responded a second incident in Frazier Homes. A man was found shot in an apartment in the 500 block of Emerald Drive. Maurice Bush, 22, was transported to the hospital in critical condition.

Both investigations are on-going.

Anyone with information on these shootings should call Crimestoppers at (912) 234-2020 or text CRIMES (274637) using the keyword CSTOP2020. Tipsters remain anonymous and may qualify for a cash reward.  A confidential tip line also is open directly to investigators at (912) 525-3124.