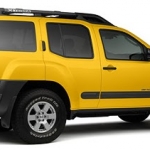 SAVANNAH, GA (January 23, 2015) Robbery detectives from, the Savannah-Chatham Metropolitan Police Department are seeking help from the public in identifying a male who robbed the Burger King on MLK Boulevard on Monday and locating the SUV used in his getaway.

The black male, wearing a burgundy hooded sweatshirt and black basketball shorts, entered the restaurant on the 600 block of MLK about 9:30 p.m., produced a gun and forced a cashier to empty the cash drawer.

He left with another black male in a yellow, newer model Nissan Xterra. (See attached photo of similar vehicle.)