SAVANNAH, GA (September 20, 2014)  On Saturday September 20, 2014 Central Precinct patrol units were dispatched to a Burglary call/Auto Theft at an auto dealership in the 500 block of Staley Avenue. Responding officers took the initial report and a lookout was advised on. Approximately 45 minutes later a call came in advising of a “suspicious” vehicle sitting in an apartment complex approximately a mile away. The vehicle was recovered and a lookout of the remaining stolen vehicles was aired. Approximately 20 minutes later the second vehicle was found and recovered in the Tatemville area.

Central Precinct detectives, Patrol and CSU continued to ride the area in attempts to find the other two missing vehicles. 22 minutes later CSU officer Ahuyon, decided to check an area not normally populated in the Tatemville area which included an abandoned warehouse. The last two vehicles, a red in color Nissan and silver in color Nissan were discovered tucked away in the back of that abandoned warehouse. All 4 vehicles were recovered within an hour and a half of the initial report due to diligent and experienced police work. 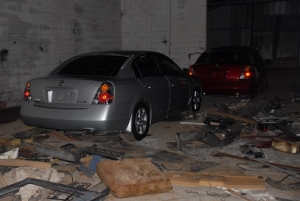 Although in this case everything worked the way it was supposed to; this does not occur in all cases. We depend on the community to be our eyes and ears. Central precinct serves over 30,000 people and 24 Neighborhoods in just our precinct area alone. So as you can see that 30,000 is on a much grander scale than Central Precinct’s roster.

To all our citizens, friends and neighbors in our Central Precinct community and the surrounding areas we need your help in identifying and calling in suspicious vehicles that are possibly stolen and the subjects/persons driving these vehicles.

Some items to look out for include:

Remember: Don’t ever walk up to a vehicle that seems to be occupied and attempt to confront the subject(s). Call 911.