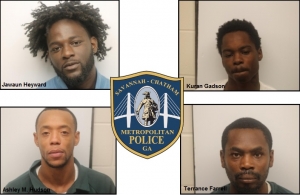 SAVANNAH, GA (February 2, 2017): In January, The Savannah-Chatham Metropolitan Police Department’s Strategic Investigations Unit (SIU) made a total of four drug-related arrests, during an investigation focused in the Edgemere-Sackville neighborhood.

On Tuesday, Jan. 31, Jawaun Heyward, 23, was arrested near Daffin Park, after making drug transactions with undercover officers over the course of two months in Edgemere-Sackville. He is charged with the sale of a controlled substance, sale of marijuana, possession of marijuana with the intent to distribute and possession and delivery of a controlled substance with the intent to distribute.

On Jan. 25, Ashley Maurice Hudson, 35, was arrested on the 1500 block of East 56th Street, while in possession of a significant amount of marijuana. He is charged with possession of marijuana with the intent to distribute, obstruction and a number of traffic violations.

Terrance Farrell, 33, was arrested on Jan. 11 after selling narcotics to an undercover officer on East 54th Street and Waters Avenue. He is charged with the sale of a controlled substance and obstruction by false name. He was taken into custody on the 3800 block of Habersham Street.

The SIU launched this investigation at the requests of concerned residents who suspected drug activity in the Edgemere-Sackville neighborhood. The efforts of the SIU are focused on making Savannah’s neighborhoods safe for all residents, by developing and using actionable intelligence to combat violent offenders, drug activity and organized criminal elements.

“The goal of the Strategic Investigations Unit is to vigilantly combat any crime that affects the quality of life of our citizens. The SIU is proud of these outcomes and will continue its work in the Edgemere-Sackville neighborhood and throughout SCMPD’s entire jurisdiction,” said Captain Lenny Gunther, Commander of the SIU. “Edgemere-Sackville citizens spoke and SCMPD responded. We hope that all of our citizens would do the same if faced with any threat to their peace of mind.”

“This type of involvement from our citizens is vital to rid our neighborhoods of crime,” said Operations Major Kerry Thomas. “Public safety is a shared responsibility. We need the citizens to continue to report crime and criminal activity to our officers.”