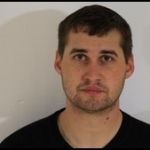 SAVANNAH, GA (January 21, 2015) A third suspect has been arrested and charged in the death of a North Carolina man whose body was found near Georgia Highway 204 on Dec. 23.

Bradley Bates, 22, turned himself in to authorities in Bulloch County on Monday and was transferred Tuesday to the Chatham County Detention Center.

A three-week investigation by Savannah-Chatham Metropolitan Police violent crimes detectives led to the arrests Saturday of  Kevin Da Palmer, 23, and Genevieve Elizabeth Meeks, 20, both of Savannah. All three have been charged by Metro detectives with murder, malice murder and possession of a firearm during the commission of a crime.

The investigation has been ongoing since the body of William Fredric Whitsett was found just west of King George Boulevard in December.

The investigation is continuing.