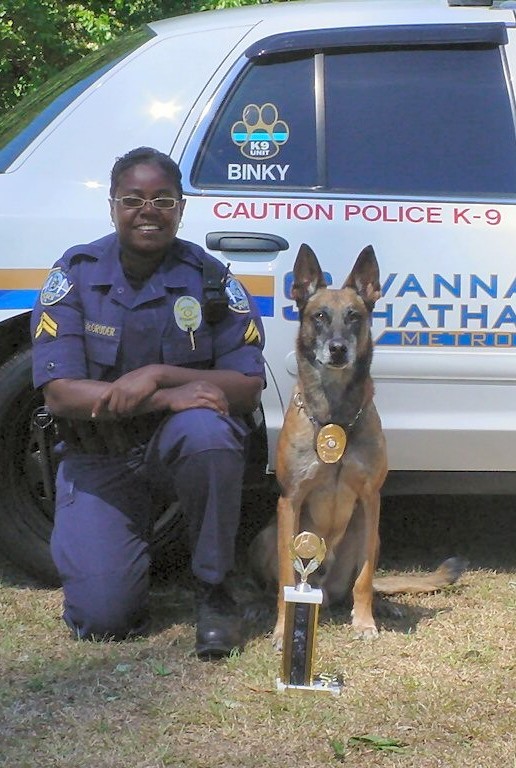 Binky, known for his supurb sniffing ability and veteran of hundreds of arrests, died Saturday at the home of his original partner and handler Cpl. Amanda McGruder and his Metro replacement Djieno, on Saturday. He had been living with McGruder and Djieno since his retirement in 2009. He was 14 years old.

His passing was sad for the many Metro police officers who worked with and behind him, said Acting Police Chief Julie Tolbert: “Police dogs quickly earn their respect from the officers who come to depend on them,” she said. “We call them a ‘force multiplier’ because they add another layer of resources for us, but they also are co-workers to many officers and partners and to their handlers who become closely attached to them. We feel for Cpl. McGruder and mourn the loss of such a valued colleague.”

Binky began working with the Savannah Police Department canine unit when it was established in 2001 and retired as a member of the Metro department after eight years of service. He had accumulated more than 330 arrests, had been called out for 210 tracks and performed 172 searches for evidence, 820 for narcotics and 207 building searches.

The death was particularly painful for McGruder, who admitted she spoiled Binky. “He wanted for nothing,” she said, “including doggie ice cream he got on his birthday every year. His death was just surreal for me.”

At his retirement, he was recognized for various captures, including one where he found a man under water in Bryan County after catching a scent from air bubbles and diving into a swamp to drag out the burglary suspect.

“Binky was the smartest police canine that I have ever seen,” said Sgt. Eric Dukarski, supervisor of the Canine Unit. “Everything that we tried to teach him, he would pick up on it so fast. It was amazing to watch him work. Cpl. McGruder loved that dog very much and I know he will be greatly missed.”