2 in Custody After Robbery, Pursuit 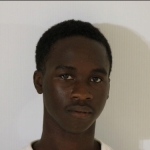 Michael Lamar Dias, 36, of the 2500 block of Alabama Avenue and Antwan Jamel Dennard, 20, of the 300 block of Grist Mill Court in Rincon were arrested after the pickup truck they had used to flee the robbery scene stopped in the yard of a house and they led officers on a foot chase across two blocks.

Charges against Dias include armed robbery, possession of a firearm by a convicted felon , and fleeing to elude, among other offenses. Dennard has been charged with armed robbery, hijacking a motor vehicle, and obstruction by fleeing.

Southside Precinct officers responded about 12:20 p.m. to the 1100 block of Eisenhower Drive where a woman reported a man demanded her car, then grabbed her purse and sped away in the pickup truck when she refused to yield her keys.

Patrol officers, joined by detectives, Crime Suppression Unit and Canine officers pursued the pickup across town to east Savannah where they saturated the area and the pickup stopped on the 2300 block of Bolling Street. The two suspects were apprehended on Mississippi Avenue.

Items taken in the robbery and two weapons were recovered.