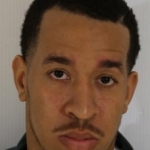 SAVANNAH, GA (December 20, 2014): Savannah-Chatham Metropolitan Police have charged a Savannah man with aggravated assault and criminal attempt at murder after he shot another man during a domestic dispute this morning.

Jeremy Dennis Scott, 27, turned himself in at Metro headquarters this morning after SCMPD SWAT team officers served multiple search warrants through the morning searching for him. Violent Crimes detectives had identified him as the shooter soon after the event.

He is charged with shooting Romondo Ashley, 22, on the 1300 block of East Duffy Street. Downtown Precinct Patrol officers found the victim on the porch of a house after responding to a shooting call at 1:14 a.m. He was transported to Memorial University Medical Center with life-threatening injuries.