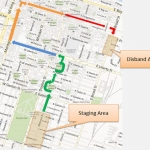 Traffic will be halted on all streets from Park Avenue to Hall Street —  between Drayton and Lincoln streets — beginning at 6 a.m. Parking will be allowed on only one side of all side streets in that area.

Parking will be prohibited beginning at 6 a.m. on the route itself: Abercorn Street from Park Avenue to Liberty Street; Liberty from Abercorn to Montgomery Street; Montgomery from Liberty to Broughton Street; and Broughton from Montgomery to East Broad Street.

The parade route itself and side streets along it will be closed to traffic at 9:45 a.m. and the parade begins at 10 a.m.

The parade is expected to disband on East Broad between Broughton and East Hull streets about 1 p.m. and traffic will be allowed as soon as possible after the last entry passes an intersection.