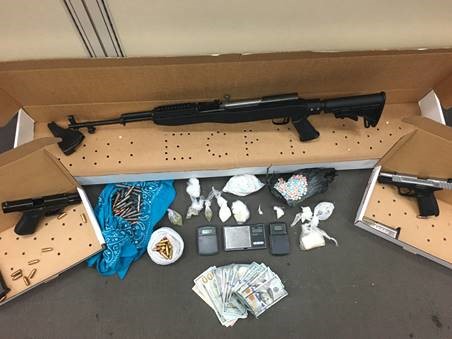 SAVANNAH, GA (February 23, 2021) – Two men have been charged after an investigation into drug activity on Reynolds Street.

On Feb. 18, following an investigation into drug activity, officers executed a search warrant at a residence in the 2000 block of Reynolds Street. Officer seized three firearms, 4.97 grams of marijuana, 53.73 grams MDMA powder, 10.33 grams powder cocaine, .86 grams heroin, and 543 MDMA pills. One of the firearms was determined to have been previously stolen in Savannah.

Tysean Davis, 18, who resided at the residence, and Bryant Bigham, 39, were charged with trafficking MDMA and three counts of possession of a controlled substance. Davis was also charged with theft by taking.

Davis was previously shot on E. 37th Street on Feb. 4 and is believed to have been an intended target in multiple recent shootings in Savannah. In all cases, Davis has been uncooperative with police.

Detectives continue to investigate the case.

Anyone with additional information on this incident or any other violent crime incident should call SPD’s Violent Crimes Tip Line at (912) 525-3124 or Crimestoppers at (912) 234-2020. Tipsters remain anonymous. Tips can also be submitted through a CrimeStoppers online tip portal at https://www.p3tips.com/tipform.aspx?ID=757. Tipsters may qualify for a reward up to $2,500, depending on the severity of the crime. More information on the process of submitting a tip and how rewards are processed can be viewed at http://www.savannahchathamcrimestoppers.org/About_Us.cfm