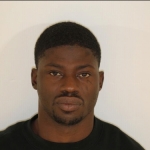 Allen Leonard King, 29, of the 1400 block of Old Grove Point Road, was charged with armed robbery and possession of marijuana after he was identified as the gunman who robbed the Travelodge on the 17000 block of Abercorn Street just before midnight Monday.

A West Chatham Precinct Patrol officer who had responded to the robbery, a short time later noticed a white Hyundai Elantra similar to one described in other robberies parked behind a building and approached it. Inside as a passenger  was King, matching the description of the suspect from the hotel robbery. A warrant for contempt of court also had been filed against him.

King has been imprisoned by the State of Georgia four times and was most recently released after serving four years of an 11-year sentence for attempted armed robbery and possession of a firearm by a convicted felon.

The robbery took place at 11:31 p.m. Monday when the gunman walked in the lobby, produced a handgun and demanded money. When the clerk attempted to run, he threatened to shoot a hotel guest who was in the lobby.

Cash believed taken in the robbery, marijuana and a handgun were recovered from the Elantra.

Metro robbery detectives continue to investigate the robbery and possible connections to other incidents. Anyone with information is asked to call Crimestoppers at (912) 234-2020 or text CRIMES (274637) using the keyword CSTOP2020. Tipsters remain anonymous and may qualify for a cash reward.