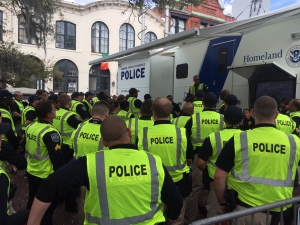 SAVANNAH, GA (March 20, 2017) – Law enforcement officers made a total of 54 arrests in the Savannah St. Patrick’s Day “Festival Zone”. Forty-four of the arrests were misdemeanors and 10 were felony arrests.

The arrests are up slightly from 2016; last year officers arrested 39 individuals in the festival area during the festival period.

Twenty-three of the arrests this year were alcohol-related, including 8 for underage drinking. In 2016 only 13 arrests were alcohol related.

“This year we made it very clear to the public that our focus was going to be on alcohol related issues like underage drinking and overconsumption, and that’s exactly what we did,” said Special Operations Commander Major DeVonn Adams who served as the daytime incident commander of the festival. “The officers did a great job identifying problems early on to keep situations from escalating.”

In addition the SCMPD’s HEAT Unit (Highway Enforcement of Aggressive Traffic) which combats impaired and aggressive drivers made 12 DUI arrests, one in the festival area. The HEAT Unit was primarily assigned to patrol the feeder roads and highways which led to Downtown Savannah such as President Street, the Truman Parkway, Whitaker and Drayton streets.

The Georgia State Patrol sent more than 100 Troopers and Motor Carrier officers to the Savannah area to assist with traffic enforcement. Troopers conducted 845 traffic stops in the Savannah Metropolitan area during the St. Patrick’s Day weekend. These traffic stops resulted in the issuance of 611 citations. The total includes 60 arrests for Driving Under the Influence.

This year three individuals were cited for swimming in the Savannah River; in 2016 only one person made that mistake. SCMPD officers, Counter Narcotics Team agents and other officers working the festival area netted 11 drug-related arrests.

“I want to thank the citizens and visitors who let our officers know when they saw a problem, whether it was a disorderly person or underage drinking. This shared responsibility is critical to ensuring the St. Patrick’s Day festival is a family-friendly event, said Management Services Commander Major Robert Gavin, the nighttime incident commander. “I also want to thank all of our civilian employees, sworn officers and the hundreds of other law enforcement officers from across the state who worked long hours to and helped us provide security for this event.” 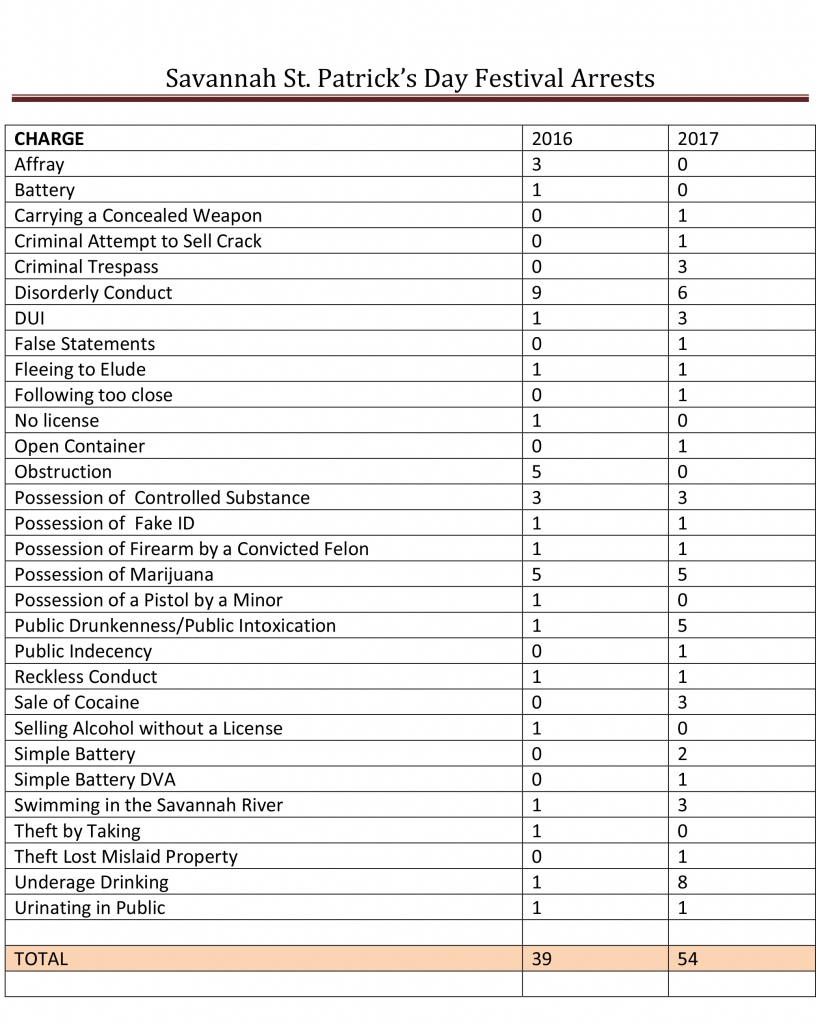