Task Force officers received information that there was illegal activity being performed in the Robbie Robinson Park located at Pendleton Street and Meadow Avenue. Around 4 p.m., officers attempted to make contact with a male in the park, now identified as Jomo Badger. Badger fled from officers on foot, and after a short pursuit, was apprehended.

Officers found that Badger was in possession of seven marijuana edibles, 3.7 grams of cocaine, 21 ecstasy pills, 2.5 Xanax pills, 23.6 grams of marijuana, a stolen firearm and cash.

“The community is continuing to step up and collaborate with us as we move forward in creating a safer city,” said Chief Roy Minter. “Our Violent Crimes Task Force will continue to be vigilant in removing guns and drugs from our neighborhoods.” 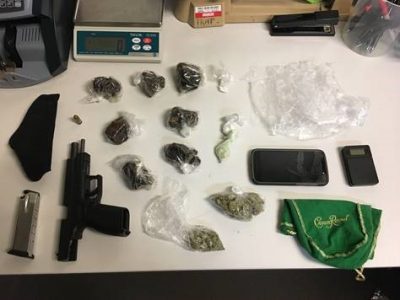