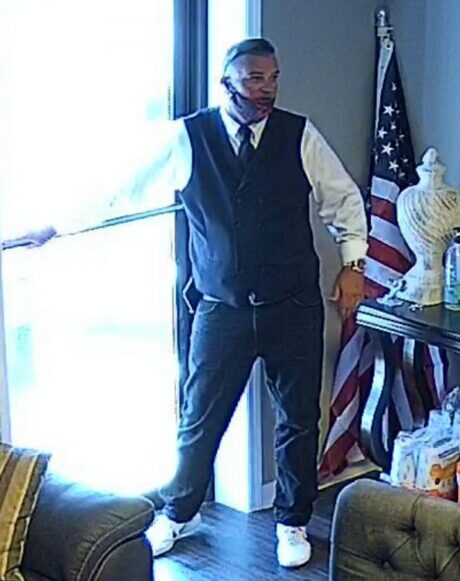 UPDATE (May 13, 2022): SPD detectives have identified the suspect as 48-year-old Ernest Wayne Nissley. Nissley has been charged with felony commercial gambling and misdemeanor theft by deception in connection to the incidents. Any business or person who gave money or made a purchase from the suspect should contact SPD Financial Crimes Unit at 912-651-6735.

SAVANNAH, GA. (May 10, 2022): The Savannah Police Department is attempting to identify a man who is impersonating local firefighters in order to solicit donations.

SPD has received several reports of the man visiting businesses claiming to be collecting donations for a firefighter with cancer. He has claimed to be affiliated with Savannah Fire and Chatham Fire while soliciting the donations. Both departments confirmed the man is not associated with their departments or collecting donations on their behalf. While speaking with businesses he has attempted to sell raffle tickets and meals as part of the fundraising efforts.

The man is described as an adult white male, who is approximately 6-feet tall with grayish blonde hair and glasses. On one instance, he was dressed in navy BDUs, a light blue button-up shirt and a fire department-related ballcap.

Anyone with information on the subject should call the SPD Crime Tip Line at (912) 525-3124 or CrimeStoppers at (912) 234-2020. Tipsters remain anonymous and may qualify for a cash reward. CrimeStoppers tips can also be submitted online by visiting SavannahChathamCrimeStoppers.org and clicking “Submit Online Tip.”