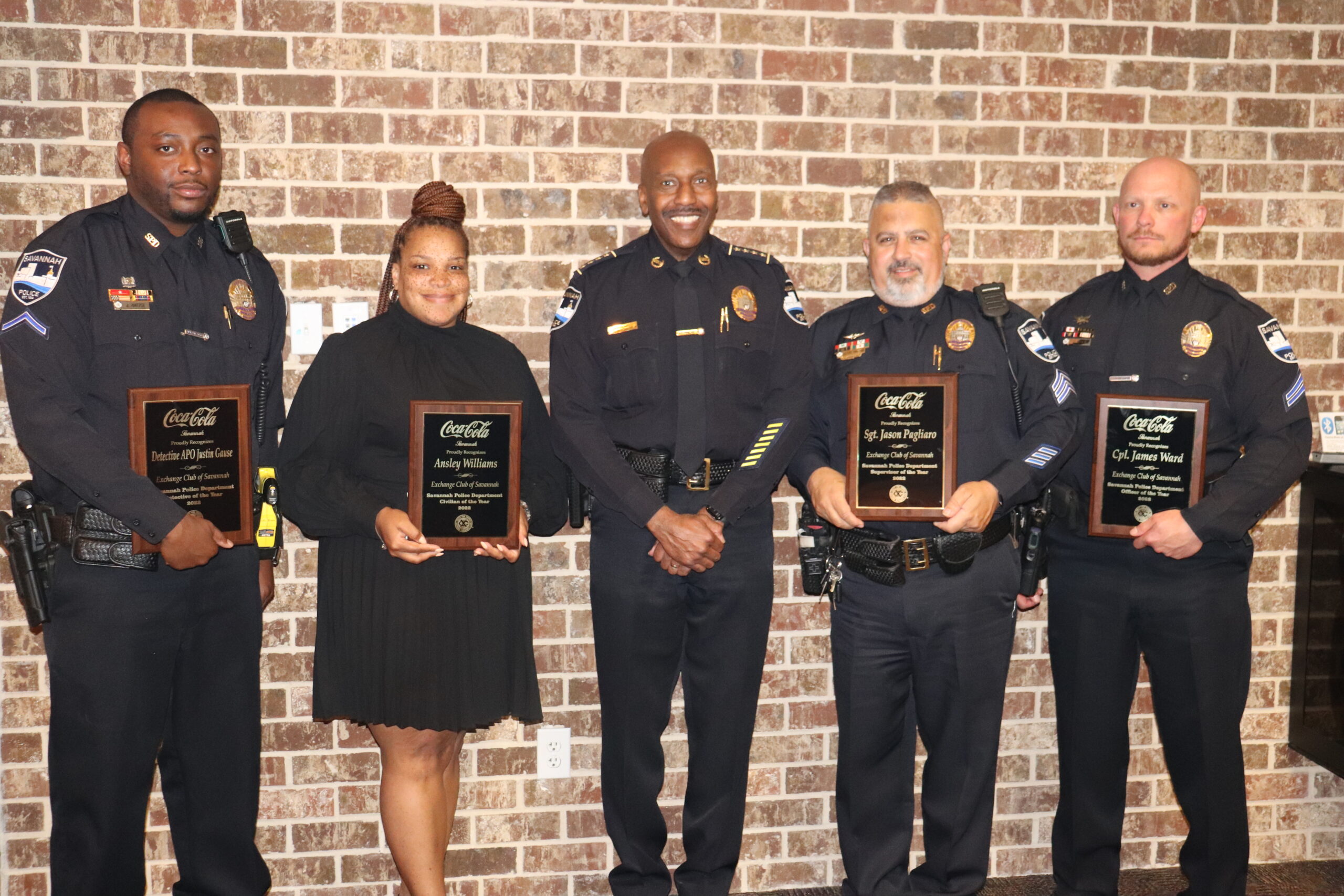 SAVANNAH, GA. (April 18, 2022): Three Savannah Police Officers and one professional staffer were awarded today by the Exchange Club of Savannah during its annual awards ceremony and luncheon at Carey Hilliard’s.

The Exchange Club of Savannah, along with sponsor Coca-Cola, presented awards for Officer of the Year, Supervisor of the Year, Detective of the Year and Civilian of the Year. The recipients were nominated by their co-workers.

Cpl. James Ward joined SPD after his retirement from the U.S. Army, where he served for 22 years. He has been with SPD for five years and is currently a detective with the Strategic Investigations Unit (SIU) and Team One Leader on SWAT. He holds a Bachelor of Arts in Management.

Ward was nominated by his peers for his success as a SWAT member. In 2021, Ward made more than 50 felony arrests and assisted in more than 100 cases. He is a standout leader on SIU and SWAT. As the Entry Team Leader for SWAT Entry Team 1, Ward has planned and led more than 50 high risk operations, including one that involved the kidnapping of infant twins. In addition, Ward has planned, organized and developed training for less experienced SWAT members. The training involves high-risk operations, such as barricaded gunmen and hostage rescue operations.

APO Justin Gause moved to Savannah to attend Savannah State University, where he graduated with a Bachelor’s in business management. Just recently, he obtained his Master’s from University of Southern New Hampshire. He has been a member of SPD for five years and is currently a detective in the Aggravated Assault Unit.

Gause was nominate due to his continued success with the department, from his time in patrol to his current role as a detective. His nomination stated that he takes his caseload seriously and is highly regarded in his unit, continuing to perform at a high level. Recently he was assigned a double shooting. His investigation not only led to the arrest of two suspects, but he was able to provide valuable intel about the case to other SPD units about the location of suspects, possible retaliatory incidents and potential witnesses.

Sgt. Jason Pagliaro has been with SPD since 2005 and currently works in the Emergency Management Office, where he is responsible for the planning of critical incidents, special events, Homeland Security and supervises off-duty employment. In addition, he is team leader of the newly formed SPD Drone Unit and assists as the after-hours Public Information Officer.

Pagliaro was nominated for his continued work on multiple high demand jobs within his office. Included in his duties is the oversight of large-scale events including St. Patrick’s Day, Rock N Roll Marathon and all annual parades. In addition, he is the team leader for the sUAS Unit and is the primary contact any time drone operation is requested. Pagliaro is a FAA-certified unmanned aircraft pilot and has flown more missions than any other team member. Pagliaro was also instrumental in the administration of the body camera and electronic citations program.

Civilian of the Year: Ansley Williams

Ansley Williams, who is a Savannah native, has been with SPD for five years and currently serves as the Records Office supervisor.

Williams was nominated for her daily work in a vital unit of the department. She responds to upwards of 20 requests in a single day, while interacting with the public by telephone, in person and email. She ensures that citizens are aware of the status of their records requests and always has a smile on her face.