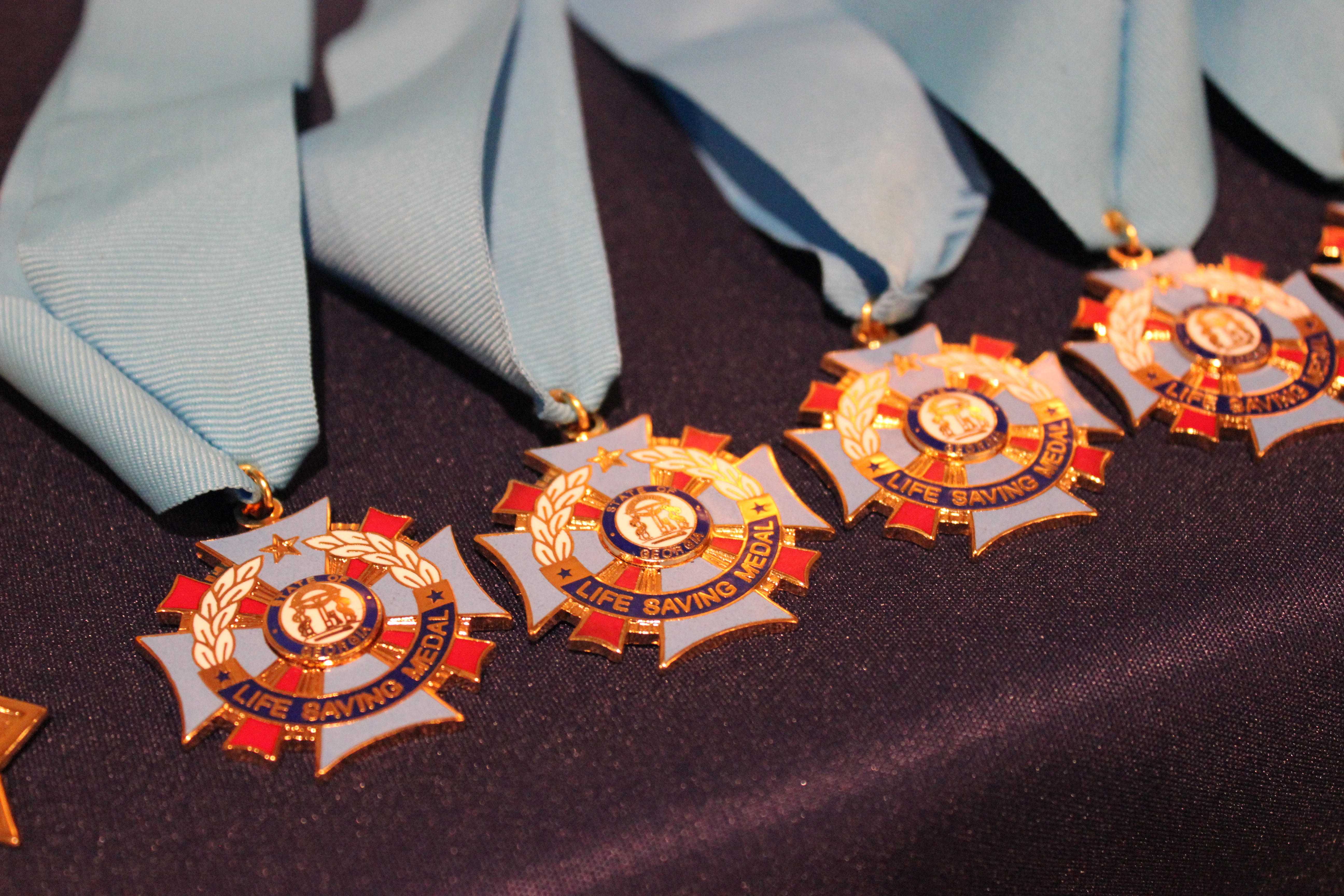 SAVANNAH, GA (November 18, 2019) – Today nearly 40 officers, civilians and members of the community were honored at the Savannah Police Department Meritorious Service Awards Ceremony and Luncheon at The Westin.

Each of the honorees was honored for extraordinary work over the past year that has resulted in the betterment of the city of Savannah and the police department. The ceremony was sponsored by Mark Spadoni, general manager of The Westin.

Sgt. Kelvin Ansari was awarded the Medal of Honor posthumously for exhibiting exceptional bravery, gallantry and heroism when he was confronted by a robbery suspect during a follow-up call in May 2019. Ansari was shot during the incident, resulting in his death. His family accepted the award on his behalf.

Officer Nicholas Peterson was awarded for a June 2019 incident where he ran up 11 flights of stairs into a burning apartment building and pulled out a burn victim and then carried her down the steps to EMS. While at the affected apartment, he repeatedly reentered the burning apartment in an attempt to find another person, who was supposed to be inside but had actually already left the building.

Cpl. John Murphy was award for a July 2018 incident where he jumped into the Savannah River in an attempt to save a suicidal subject who had jumped into the river while wearing a weighted sea pack on his back.

Officer Anthony Christie was awarded posthumously after he was fatally injured in a May 2018 crash on Interstate 16 while he was diverting traffic. A tractor trailer failed to see his patrol car and crashed into it, resulting in his death. Capt. Tonya Reid, of the Central Precinct, accepted the award on his behalf.

Sgt. Kelvin Ansari and Officer Douglas Thomas were awarded after both were shot while responding to a follow-up robbery call in May 2019. Ansari, a 10-year veteran of the department, was fatally wounded. Thomas, who had been officially sworn in as an SPD officer three months earlier, survived the incident. Ansari’s family accepted the award on his behalf.

Officer Ian Gallagher, Officer Tyler Suchoski, APO Travis Duncan and Officer James Ward were awarded for a June 2018 incident where they found a subject who had been shot in the head. Upon investigation, they learned that the man had previously shot another person in another location before turning the gun on himself. Officers quickly worked to locate the other injured person and provided life-saving, medical assistance to both men, resulting in saving their lives.

Officer James Ward and APO Travis Duncan were awarded for a November 2018 incident where they responded to a call where a man had been shot in his lower leg and upper body. They applied a tourniquet to his legs and pressure to his abdomen and groin, resulting in saving his life.

Sgt. Christopher Hewett and Officer Robert Parker were awarded for a May 2019 incident where they responded to a call where a man was bleeding heavily from his leg and had damage to his femoral artery. They applied pressure until EMS could arrive, resulting in saving his life.

Officer Chris Geisler and APO Christina Martin were awarded for a July 2018 incident where a man was suffering from multiple deep cuts to his arms. They applied a tourniquet and provided emergency assistance until EMS could arrive, resulting in saving his life.

Officer Bijan Abbassi, APO Sherry Conaway and Officer John Dorsz were awarded for a May 2019 incident where officers responded to a man with a gunshot wound to the thigh. They applied a tourniquet, resulting in saving his life.

Officer Ian Gallagher and Officer Shaquille Brown were awarded for an August 2018 incident where officers responded to a home on fire with a woman trapped inside. Officers could not gain entry into the home, but helped the woman escape from a high window before firefighters could arrive on the scene.

Officer Devin O’Neil, Officer Shaquille Brown and Cpl. Chris Ameduri were awarded for an incident in April 2019 where they responded to a downtown walkway bridge and discovered a vacationing citizen hanging on to a suicidal subject who had attempted to jump from the bridge. The officers assisted in safely pulling the suicidal subject to safety.

Cpl. William Barnett, APO Melanie Dubose, Lt. Bradley Beddow and Officer Michael Anderson were awarded for a collective effort in April 2019 when a suicidal person threatened to jump from the Talmadge Bridge. The officers worked collectively to get the man back to safety and to get medical assistance.

Denise Ezekiel, a 911 dispatcher, was awarded for a December 2018 incident. SWAT and HNT responded to a residence for a barricaded person call. While they were outside, the subject called 911. Ezekiel quickly built a rapport with the man, gaining his trust and staying on the call while he spoke with negotiators. Her assistance resulted in a peaceful resolve for the call.

SCpl. Stephen Rivers and Sgt. Clayton Cortes were awarded for their initiative to build an SPD shooting range out of a once vacant lot. They facilitated, coordinated and labored to create the range while continuing in their daily training duties at the Training Unit.

Jim and Phyllis Brackeen were awarded for their dedication and actions following the death of Officer Anthony Christie. Jim Brackeen, who lost his son in the line of duty in North Carolina in 2016, fundraised and donated funds to ride his bicycle 500 miles in the annual Road to Hope Ride in Washington, D.C., in honor of Christie. Phyllis Brackeen worked long hours alongside her husband to help raise the funds and offered support to the department.

Summer Johnson and Brent Backman, of Texas, were vacationing in Savannah in April 2019 when they witnessed an unknown woman make troubling statements. While Backman went for help, Johnson stayed with the woman. When the woman attempted to jump from a walkway bridge, Johnson caught her and held her until police could arrive. The officers received the Chief’s Award of Excellence for their action on this call.

Tony Uhrig and Floyd Jimmo were awarded for the countless hours they have spent volunteering. Uhrig is the human face for SPD’s McGruff the Crime Dog, and Jimmo is his companion, helping Uhrig navigate in the suit and leading him to groups of children. They manage the multitude of requests that sometimes result in juggling multiple events in one day.

Ann Healy, who is one of the owners of downtown’s PJ Thai Restaurant, has provided support and friendship to countless members of the Savannah Police Department, who work downtown. She is known to provide a listening ear, a free meal and even will hand deliver food to detectives who are sometimes too busy to leave their desks to eat. Since the death of former Cpl. Luis Molina, Healy has also assisted in maintaining his gravesite.

Bonnie and Jessica Walden, of Bay Street Blues, have played a tremendous role in the success of several community outreach projects for Central Precinct. Each year they provide hundreds of pounds of candy to assist in Central’s Halloween event, and at Christmas they collect funds through a fundraising drive at their business to buy gifts for local families. Last year, they raised $6,000 to purchase gifts for 150 children and five families. They also assisted in selecting, wrapping and delivering the toys to the families.

HOT 98.3 was awarded for their support providing services for multiple SPD events, including the Northwest Precinct ribbon cutting, Halloween and Easter events and others. They also partnered with SPD in July 2018 to create the highly successful Lip Sync Challenge video, which has more than 2.5 million views on Facebook and has proved to be a valuable marketing tool for SPD.