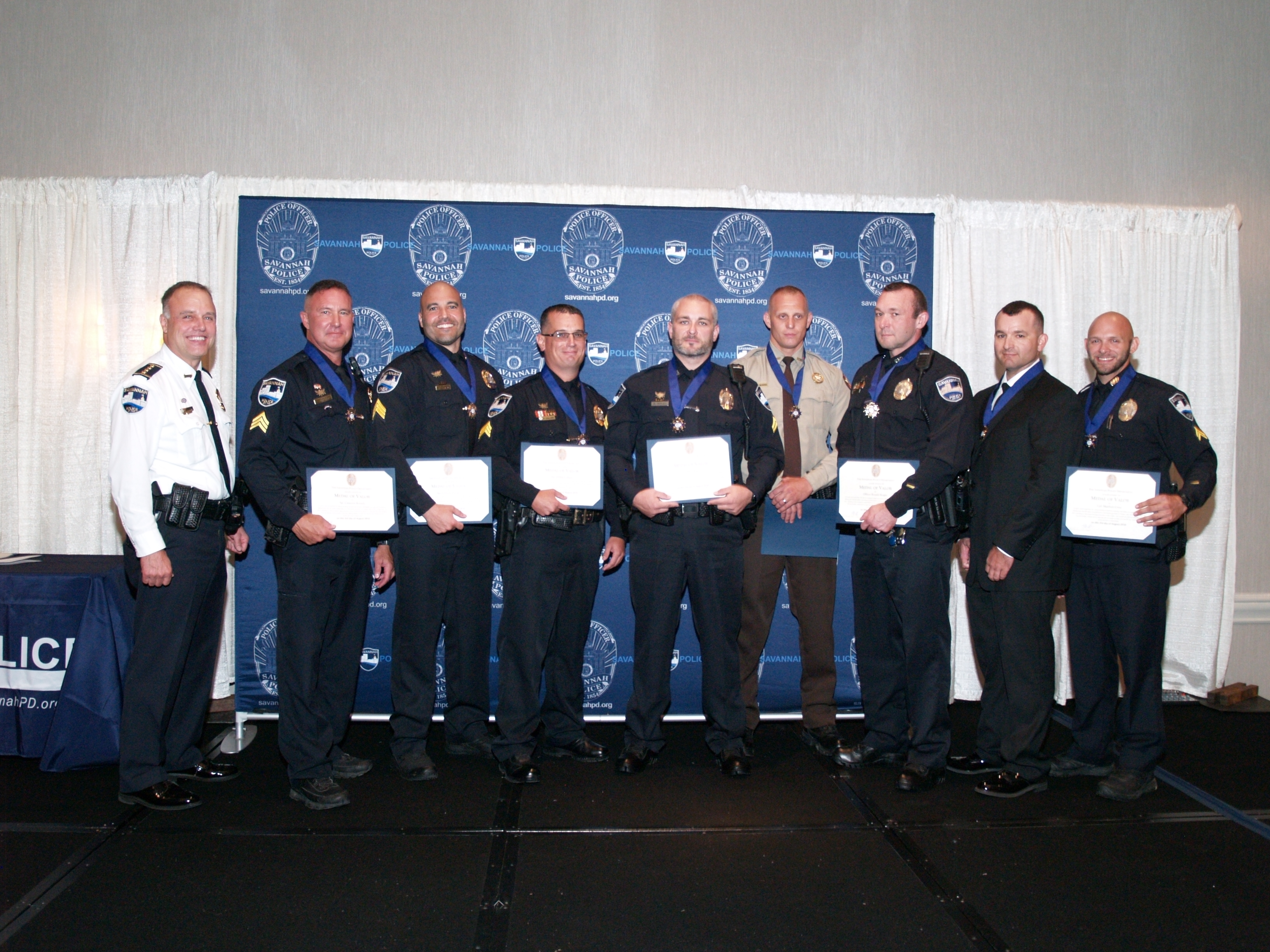 SAVANNAH, GA (August 3, 2018) – Today nearly 40 officers, civilians and members of the community were honored at the annual Savannah Police Department Meritorious Service Awards Ceremony and Luncheon at The Westin.

Each of the honorees were honored for extraordinary work over the past year that has resulted in the betterment of the community and the police department. The ceremony was sponsored by Mark Spadoni, general manager of The Westin.

·         Sgt. Cameron Kovach, Sgt. Octavio Arango, Sgt. Philip Collard, Cpl. Barry Ripley, Officer Ronald Reagin, (former) Cpl. Trevor Kruwel, Cpl. Matt Cross, (former) APO John Morris and Cpl. Daniel Kang were awarded for a collection action during a SWAT operation in February 2017 where a woman and two children were being held inside a residence. Due to their actions, the victims were safety removed from the residence and the suspect was taken into custody. 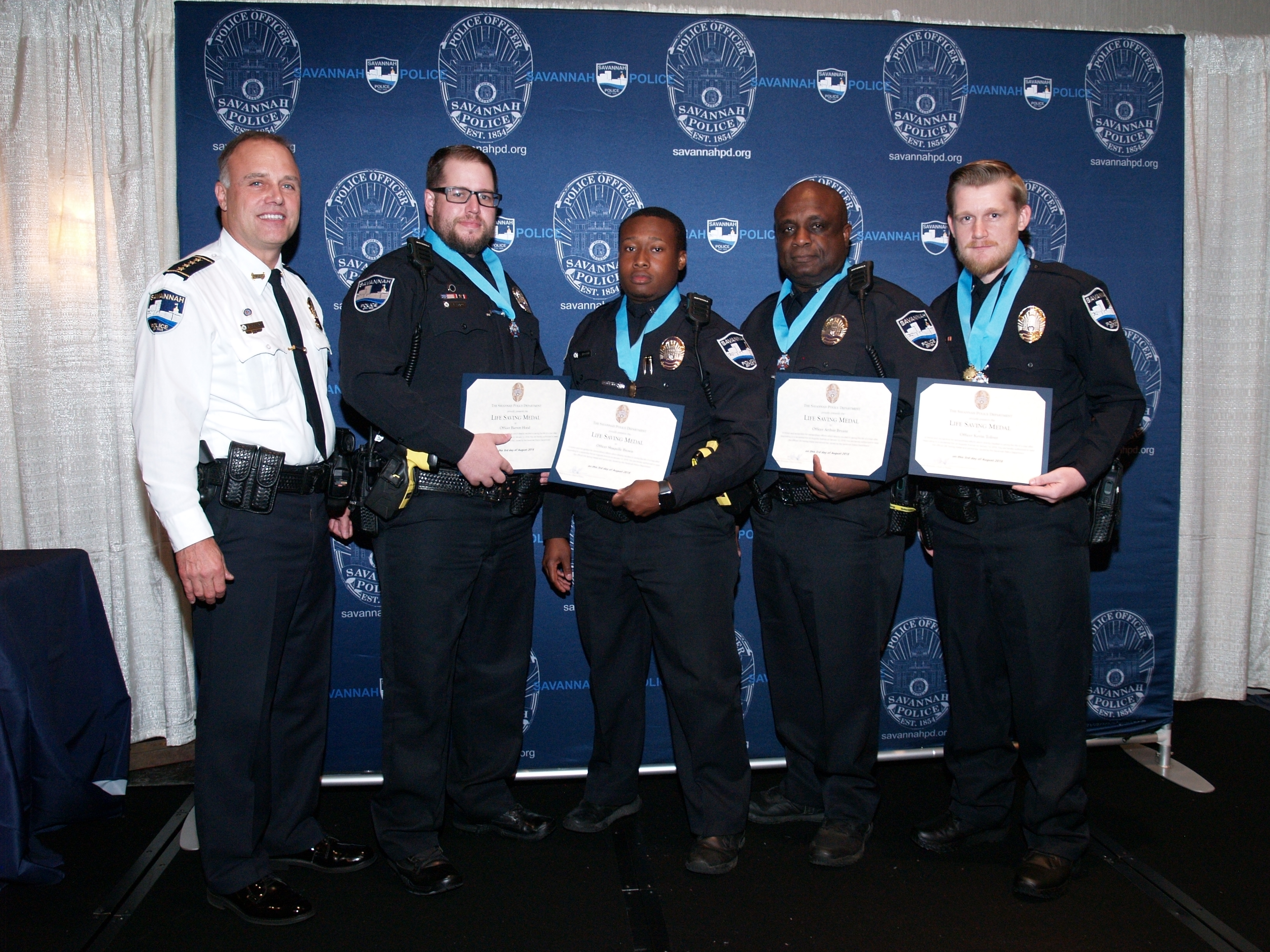 ·         APO Andrew Jenkins and (former) Officer Joshua Chatting were awarded for rescuing two women from a residential fire on Shad Road in March 2017.

·         APO Matthew Good and Officer Kevin Toliver were awarded for pulling a man to safety after he threatening to jump from the Talmadge Bridge in February 2017.

·         Officer Keaton Lane was awarded for his actions after finding a man bleeding from the neck following a shooting in City Market in July 2017. Lane used his hands to put pressure on the wound to control bleeding.

·         Officer Austin Neumann, Officer George Walker, Officer Bijan Abbassi, Trooper Dustin Stone and EMT Mary Meeks were awarded for their collective actions when finding a woman threatening to commit suicide off the Truman Bridge in December 2017. They worked together to pull her to safety.

·         Officer Barrett Hood, Officer Shaquille Brown, Officer Kevin Toliver and Officer Arthur Bryant were awarded for their actions when responding to a residential fire on Augusta Avenue in January 2018. The officers busted down a door and were able to pull a man out of the burning structure.

·         Officer William Eng was awarded for his actions when responding to a 1-month-old who had stopped breathing. Eng performed chest compression on the newborn until she began breathing on her own.

·         Officer Bradley McClellan and Officer Keaton Lane were awarded for their actions when they found a man bleeding from the chest after a shooting on E. 40th Street in February 2018. They covered the wound and began CPR until he regained consciousness.

·         APO Joseph Altomare pulled a woman to safety when she attempted to run into the line of gunfire at the scene of a warrant service on Marian Circle in January 2018. 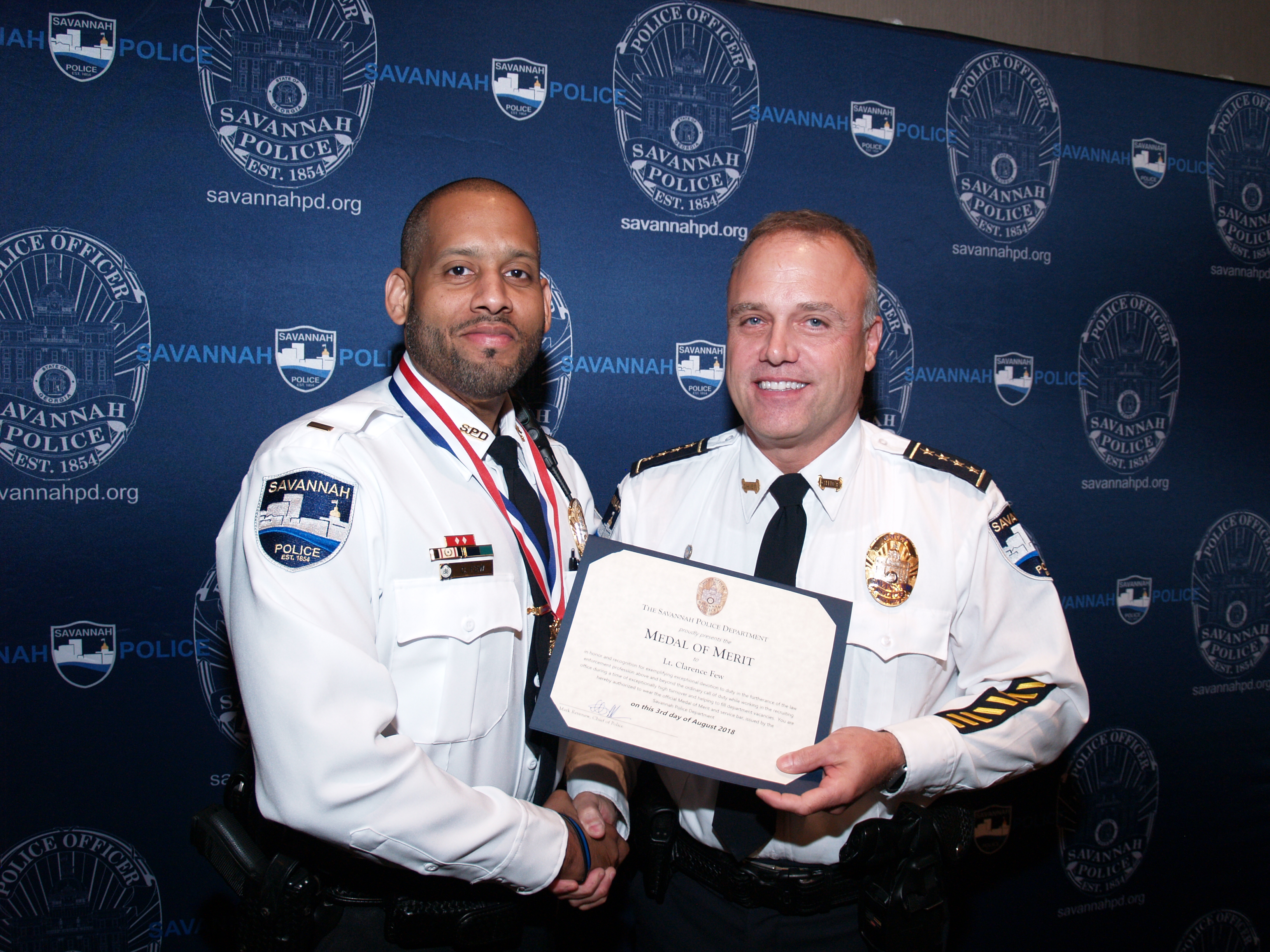 ·         Lt. Clarence Few was awarded for his work in the recruiting office during a time of high turnover. Due to his efforts, the department was able to quickly return to full staffing.

·         Officer Andre Jenkins was awarded for his actions when encountering a family that was living without air conditioning in June 2017. Jenkins purchased multiple fans for the family.

·         Sgt. Kasey Suddath was awarded for her actions after meeting a grandmother who was raising multiple grandchildren and did not have the means to provide basic needs. She collected donations, connected the family with resources and coordinated repairs to the home.

·         (Former) Sgt. Marcus Graves was awarded for his work as a mentor and counselor to fellow officers and assisted them in their efforts to grow in their careers.

·         Sgt. Jonathan Puhala was awarded for his work as the leader of SPD’s first fully-staffed Gang Unit. His work has assisted in the increase in the prosecution of gang members and violent offenders and has assisted in our growing relationship with state and federal partners.

·         APO Daniel Newman was awarded for his work as the SPD liaison for Project Ceasefire. Since his appointment, the program has seen an impressively high aceptance rate and the time it takes to get cases federally indicted has drastically reduced.

·         Nancy Brooks was awarded for her actions as a dispatcher during the July 5, 2017 shooting incident at City Market and her professional handling while dispatching to multiple crime scenes.

·         Chaplain Charles Roberson was awarded for his spiritual and emotional support to the department in times of tragedy and heartache. Roberson leads SPD’s team of chaplains.

·         Randy Lucas was awarded for his continued dedication as an SPD volunteer since 2005. 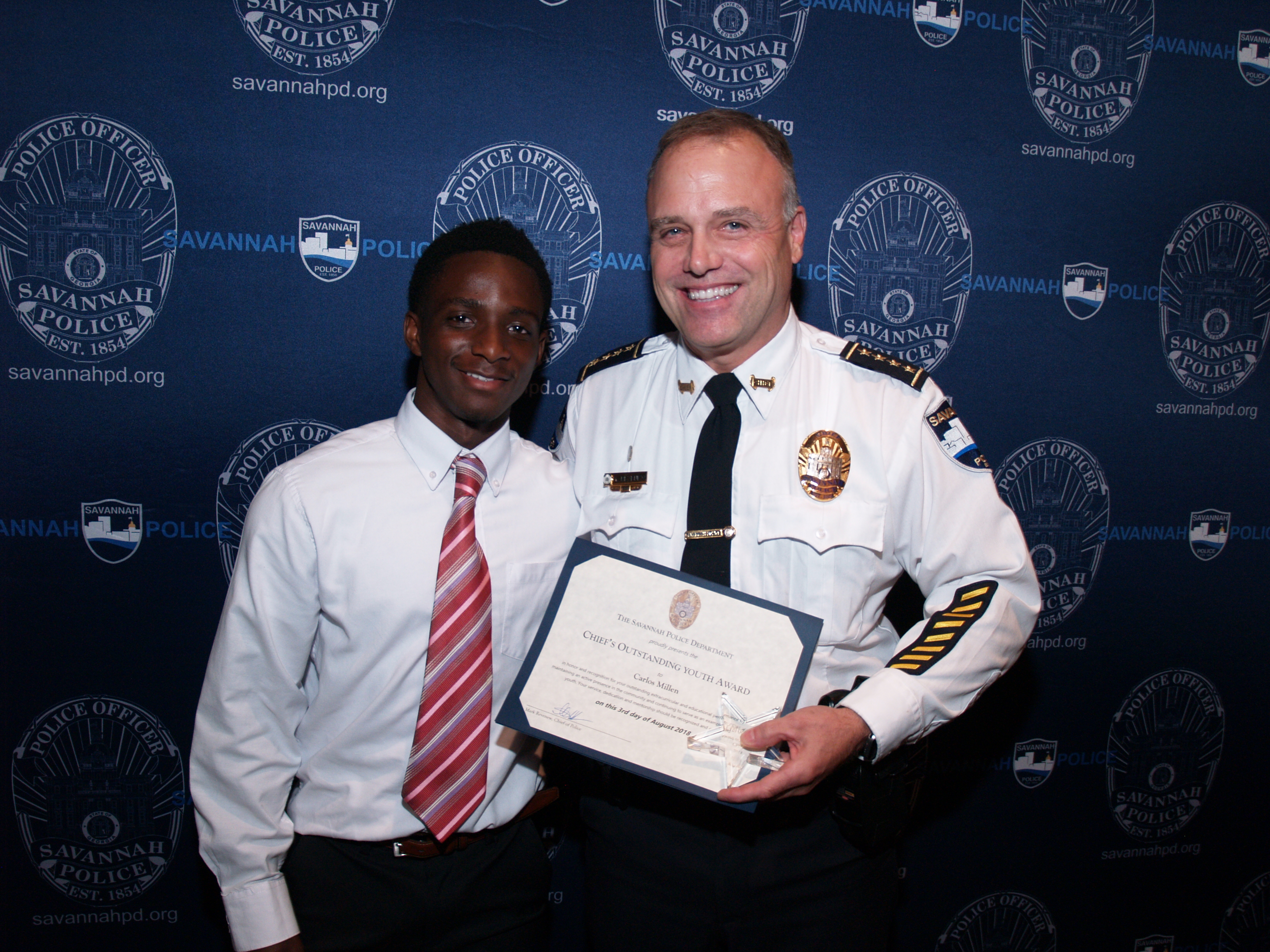 ·         Carlos Millen, 17, was honored for his academic and athletic accomplishments in addition to his role as a mentor to his peers. He is active in Performance Initiatives, a non-profit organization that mentors area youth, and recently placed fifth in the world at the Junior World Championship in Uzbekistan.

·         Marc Dunston, also known as Magic Marc, was honored for his continued support to the police department in its efforts to connect with area youth. Dunston is a magician and children’s author who volunteers his time, services and animals to police events and its school reading program.