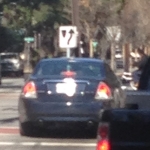 SAVANNAH, GA (January 28, 2015): Violent Crimes detectives of the Savannah-Chatham Metropolitan Police Department are investigating the shooting of a Savannah man in a city park on Wednesday afternoon.

Kelvin Frazier, 28, received a non-life threatening injury at 1:41 p.m. and was transported for treatment.

He was on the basketball court in Wells Park on MLK Jr. Boulevard between East 38th and 39th streets when a passenger in a gray vehicle, being driven north on MLK, fired towards him. A passer-by provided a photo of the vehicle.