UPDATE: The suspect was taken into custody today during an operation conducted by Metro’s Strategic Investigations Unit and the Southeastern Regional Fugitive Task Force of the U.S. Marshal’s Service. 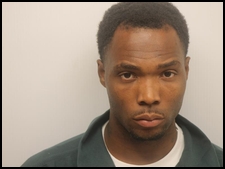 Maurice Napoleon Hodges, 26, is a black male who is approximately 5-foot-11 and 155 lbs. He is known to frequent the areas of the Greyhound Bus Station, Fernwood Drive, Caroline Drive, and the 59th Street area.

The charges stem from a July 9 incident on Wayne Street and a Aug. 19 incident that occurred inside a vehicle parked in the Berrien and Jefferson Street area.

Anyone with information on the incidents or Hodges’ whereabouts is asked to contact police. A confidential tip line is open directly to detectives at (912) 525-3124. Information can also be forwarded to CrimeStoppers at (912) 234-2020. Tipsters remain anonymous and may qualify for a cash reward.