04/12/19 UPDATE: Due to a community member who sent in a tip through CrimeStoppers, the suspect was identified as April McPherson, 48, who was arrested on April 7th. Detectives would like to thank the community for assisting with this case. Tipsters are always anonymous and may qualify for a cash reward.

SAVANNAH, GA (March 27, 2019) –Savannah Police Southside Precinct detectives are seeking the public’s assistance in identifying a suspect in a theft at Parker’s on the 10500 block of Abercorn Street on Tuesday, March 19.

Shortly before 9 p.m., the female suspect entered the store and stole a tablet, belonging to Parker’s, before leaving the premises in a white, late model Mazda 3.

The suspect is described as a middle-aged black woman. During the incident, she wore a blue shirt, dark pants and a brown purse. 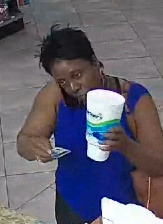 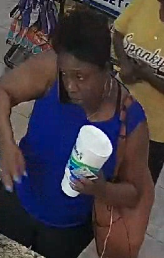