SAVANNAH, GA (April 9, 2019) – The Savannah Police Southside Precinct detectives are seeking the public’s assistance in identifying a male and female suspect in an entering auto that resulted in transaction card theft.

The morning of March 13, the victim noticed their wallet was missing from their vehicle, which was unlocked. The victim was later notified that their credit card was used at various stores at a local shopping mall. 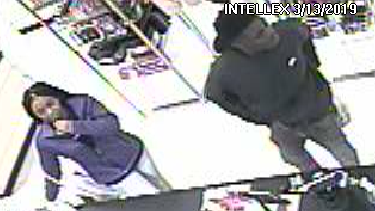