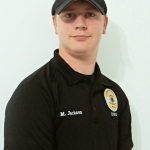 SAVANNAH, GA (March 27, 2016): Saturday, March 26, APO Matthew Jackson of Savannah-Chatham Metropolitan Police Department’s Downtown Precinct was first to arrive at a house on the 100 block of E. Lathrop Avenue during an active kitchen fire – a fire extinguished through Jackson’s quick thinking and bravery.

Jackson arrived at work to begin his afternoon shift just minutes before hearing dispatchers advise of the house fire directly across the street from his precinct. Jackson immediately ran outside, where he encountered the distraught 80-year-old owner of the burning house.

At Jackson’s request, the homeowner described the location of her fire extinguisher. Jackson then entered the smoke-filled house, extinguishing the fast-spreading blaze that originated from the kitchen stove, ultimately sparing the rest of the structure from further damage.

Firefighters arrived a short time afterwards to remove all remaining smoke from the house. To comfort the homeowner, Jackson remained with her until members of her family were notified.

“This sort of bravery is not shocking,” said Capt. Ben Herron Interim Major of SCMPD’s Patrol Division. “Our department is strategic in seeking out the bravest and most committed men and women to serve this great community. We definitely commend this officer’s quick thinking and selflessness.”

Jackson has served SCMPD for nearly four years. He is assigned to the Downtown Precinct’s Patrol Division.