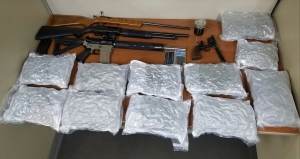 SAVANNAH, GA (May 2, 2016): The Savannah-Chatham Metropolitan Police Department has been working diligently to target violent criminals who are using illegal guns to harm our citizens and create fear in our community.  Year to date, as of May 1, Metro officers have taken a total of 392 illegal guns off of the street, which is a 27% increase over this time last year.  That’s an average of approximately four illegal guns seized each day.

Chief of Police Joseph H. Lumpkin, Sr. said, “We are going after criminals and illegal guns with a laser focus.  But there are more than 300 million guns in America and criminals are easily able to get their hands on more guns; they are stealing them and purchasing them illegally.  We have to put a stop to this.   We need the community to step forward and secure their firearms and provide us with timely information about the felons who illegally have guns.  We want to prevent gun violence.  If we don’t, there will be more victims, more people shot and killed.  We don’t want any more victims.”

So far this year the Violent Crimes Task Force has seized 44 illegal firearms, a 266% increase compared to this time last year. The Task Force just wrapped up a six-day operation, making 33 felony and 28 misdemeanor arrests from April 24-29.  They also seized 15 illegal firearms, seven of which had been reported stolen.  This is part of an ongoing initiative to reduce the number of violent offenders and illegal weapons.

“The task force did an outstanding job getting illegal guns and drugs off the street, but more importantly we arrested the felons who perpetuate crime in our city,” said Capt. Ashley Brown, commander of the Violent Crimes Task Force. “We will continue to conduct these types of operations and clean up the streets of Savannah.”

Members of the task force reconvene periodically to identify and conduct targeted patrols of the jurisdiction’s most active areas to deter and remove high-risk individuals and situations that could endanger the public.