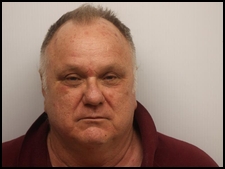 Robert Fallin, 66, is charged with simple battery (domestic violence assault) and aggravated assault on a law enforcement officer. Hostage negotiators communicated sporadically with Fallin for nearly 10 hours and eventually talked him out of the residence where he was arrested without further incident.

SCMPD patrol officers initially responded to a domestic disturbance call at the residence at approximately noon, Feb. 4. The victim went to a neighbor’s house and had the neighbor call 911. As a precaution, the victim was transported to the hospital for medical evaluation.

When officers arrived on scene, they made contact with Fallin inside his residence when the suspect then brandished a gun. As a result, SWAT, the hostage negotiation team, and the explosive ordnance team were dispatched to the scene.

These special operations units used remote-controlled robots to view inside the apartment and attempt to communicate with the suspect; however, Fallin fired multiple shots at the robots and disabled them. At one point, Fallin also fired several shots in the direction of police officers on the exterior of the apartment. Although Metro officers never returned fire, they did deploy CS tear gas rounds into the suspect’s apartment in an attempt to force him out of the residence.

Throughout the incident, negotiators continued communication attempts with Fallin and eventually convinced him to surrender. After being taken into custody, he was transported to Memorial University Medical Center for medical evaluation, SCMPD headquarters for questioning and then the Chatham County Detention Center.

“This was a long and tense ordeal, but our Metro officers and particularly our special operations units handled it safely and professionally,” said Capt. Carl Ramey, West Chatham Precinct commander. “This certainly could have gone much worse, but in the end everyone went home safely.”

Chief Joseph H. Lumpkin Sr., also commended the officers for their teamwork during the 10-hour ordeal, noting the restraint demonstrated by both the first responding officers and the SWAT team based on their principles and training on the sanctity of human life.

“This is a great example of our officers’ professionalism and their use of evolving police principles,” Lumpkin said. “We kept the residents safe, the officers safe, and ultimately the suspect safe. Our SWAT was ready for any eventuality, but our communication and patience paid off in the end. This was an excellent ending to a potentially bad situation.”