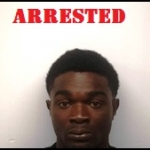 At about 9:30 a.m. on Wednesday Central Precinct patrol officers responded to the 400 block of East 49th Street finding DeBerry outside his house suffering from a life threatening gunshot wound. DeBerry was transported to Memorial University Medical Center, where he died.

Investigators believe DeBerry was shot during a dispute with Varner regarding a business transaction.

Evidence also linked Varner to a Dec. 20 shooting on the 700 block of East 39th Street that injured Scrivens.