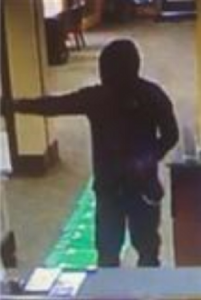 Metro responded to the scene at approximately 1:30 p.m. after a suspect entered the business, displayed a gun and demanded cash. Employees complied with the suspect’s demands. The suspect fled in an unknown direction, possibly in a white vehicle. No injuries were reported.

The suspect is described as a black male standing approximately 6-feet tall. During the incident he wore a dark-colored hooded jacket, a face covering, gloves and dark pants.