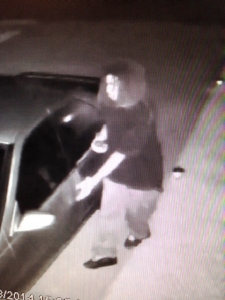 SAVANNAH, GA (October 1, 2014): West Chatham Precinct investigators for Savannah-Chatham Metropolitan Police Department are searching for the person who in one week, broke into at least eight cars in the Bradley Point South community.

Just after 3 a.m. on Sept. 19, a residential surveillance camera recorded footage of an individual attempting to break-in to a car. Metro investigators eventually received 7 entering-auto reports from residents throughout the Bradley Point South neighborhood. Detectives also are investigating an entering-auto that occurred in the same neighborhood on Sept. 26. All of the incidents happened overnight. Items were stolen during each incident.

The person sought for questioning is fare skinned, with thick shoulder length dreadlocks and stands 5-8 to 5-10.

Anyone with information should to call Crimestoppers at (912) 234-2020 or text CRIMES (274637) using the keyword CSTOP2020. Tipsters remain anonymous and may qualify for a cash reward.