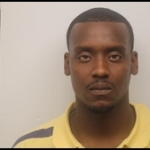 Hughes is charged with felony murder. He was arrested without incident during an appearance at the Chatham County Courthouse.

On June 26, at about 9:41 p.m. Epps was found deceased in the driveway to Ponderosa Apartments. Epps was located inside of a black 2015 GMC Yukon with a gunshot wound. He was located by officers investigating a nearby shots fired call dispatched moments earlier.

Anyone with additional information on this case is asked to call Crimestoppers at (912) 234-2020 or text CRIMES (274637) using the keyword CSTOP2020. Tipsters remain anonymous and may qualify for a cash reward.