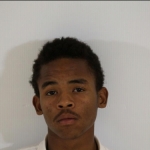 SAVANNAH, GA (December 7, 2014): An 18-year-old Savannah man has been charged in the shooting death of a 15-year-old boy Thursday night.

Naivareal Raheem Smith has been charged with reckless conduct and involuntary manslaughter in the shooting of Jamari Batts at the Madison Apartments on West 54th Street.

Violent Crimes detectives from the Savannah-Chatham Metropolitan Police Department found that Smith and Batts were handling a gun outside the apartment where Batts lived when it fired.

Although charges have been filed, detectives continue to investigate the shooting.