SAVANNAH, GA (June 24, 2015): The public is being asked to help identify and local a woman caught on camera attempting to use a credit card at Target. The card was stolen from a car at Wormsloe Historic Site on June 14.

The heavy-set, white female with long blonde hair was seen attempting to use credit cards at an area Target store only moments after a purse was taken from a  North Carolina family’s car between noon and 1:40 p.m. She is believed to have been driving a brown or tan Nissan.

The purse was locked in the car while its owner and her family hiked in the state park. They returned to find a tool had been used to force open the door to retrieve the purse. The owner immediately cancelled the financial transaction cards moments before the suspect attempted to use them. Also taken were the burgundy purse with gold emblem, her drivers’ license and insurance cards.

Anyone with information on identity or location of the suspect is asked to call Crimestoppers at (912) 234-2020 or text CRIMES (274637) using the keyword CSTOP2020. Tipsters remain anonymous and may qualify for a cash reward. 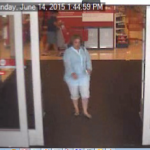 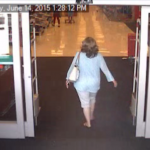