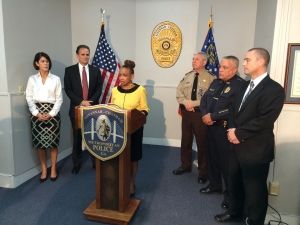 Over the past several months law enforcement officers have been meeting to identify all gang members, members of violent groups, their associates, and friends who are connected to the shootings and murders in Savannah and Chatham County. Members of those groups who are on parole or probation were required to attend the call-in.

“They were invited to a meeting where they were given messages by key people in our community, both from law enforcement, political figures and community members,” said Project Manager Dr. Maxine Bryant. “That message simply was, do not kill anyone. If you do then there is going to be swift and certain consequences. The second part of that message was, do not be a part of the most violent group. Again if you do there will be swift and certain consequences.”

Mr. James Durham, is the first assistant for the US Attorney’s Office in the Southern District of Georgia. “Typically our cases focuses on massive cases, drug cartels, big time fraud organizations, public corruption, but because of the violence that is going on in this city are we are joining hands with the locals. If there were federal cases to be made, they were going to be made.”

Durham made sure the group at the call-in understood the ramifications.

Durham prosecuted a case in Brunswick (GA), where a convicted felon received a 15 years sentence in federal prison for having one bullet in his pocket.

Now it is up to the individuals who attended the call-in and the community as a whole to spread the word.

“Several of them talked to me at length and said we heard you,” said Dr. Bryant. “One girl said I’m not involved but my sister is behind bars now and I’m going to tell her. Another young man said, ‘I’m going to go back and tell. As long as we are getting the word out to perpetrators of violence then our message is getting out. This is the beginning of a process so that means the community, the village needs to be patient as we methodically, deliberately, intentionally continue forward, you have to trust the process.”

The Savannah-Chatham initiative to End Gun Violence: Step Forward is an approach that will target the most violent groups and gangs members who are responsible for a majority of the shootings and homicides in our community. This approach tells gang and group members to lay down their weapons. It also gives them the option to seek help from community organizations to receive counseling, job training, and other services to help turn their lives around.