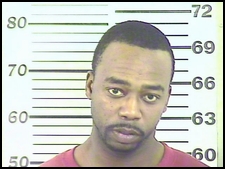 SAVANNAH, GA (   February 2, 2012 ) An East Savannah man is arrested and charged for crimes in three of five precincts.

Shawn Bannister, 35, of Oak forest Drive, was arrested January 24 on a bevy of charges.

His jurisdictional crime spree started back in November. BANNISTER is charged with entering auto and credit card fraud from an incident that occurred in the Southside Precinct. On January 18,  he was in Islands Precinct, caught on tape in Memorial University Medical Center’s Parking Deck breaking into a car, and has been charged with an additional count of entering auto.

That same day in Central Precinct,  BANNISTER was found to be in possession of a stolen credit card from an entering auto that had just occurred. He was using it to fill up two vehicles at a local gas station. He told police he bought the card. He has been charged with two additional counts of credit card fraud, two counts of identity fraud and one count of theft.

Police are looking at similarities between these cases and several other unsolved incidents. BANNISTER has an extensive arrest record.