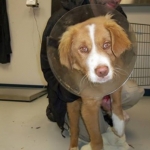 SAVANNAH, GA (February 24, 2016): Savannah-Chatham Metropolitan Police Department’s Animal Control Division is searching for the owners of an Aussie /Collie mix currently receiving treatment at Metro’s animal shelter after being found on Feb. 23 near Campbell Street, with an injury to his left hind leg.

Animal Control officers named the dog Campbell after the street in which he was found. Campbell’s foot was in a bandage when he was retrieved by animal control officers, who immediately took him to an emergency veterinary clinic for medical evaluation.

Veterinarians who examined Campbell determined that his foot was swollen and bandaged too tightly, resulting in loss of blood flow and damage to his lower foot. Despite the severity of Campbell’s injury, veterinarians believe he can make a slow but full recovery with consistent wound care.

“Despite everything, this pup is in good spirits,” said Jessica Armstrong of SCMPD’s Animal Control Division . “He is walking well on a leash. He’s able to sit properly and has full puppy energy. We’re monitoring him closely and are committed to his recovery.”

On Feb. 29, Campbell will continue treatment in the care of Coastal Pet Rescue, as Animal Control continues its search for Campbell’s owners.

Campbell is a young male canine, with red fur and white patches. He weighs roughly 22 pounds.

Anyone with information on the identities of Campbell’s owners is asked to call Animal Control at 912-652-6575.

***Members of the media interested in speaking to Animal Control staff about Campbell should arrive at the shelter at 2 p.m. Still images of Campbell are available. The animal shelter is located at 7211 Sallie Mood Drive.