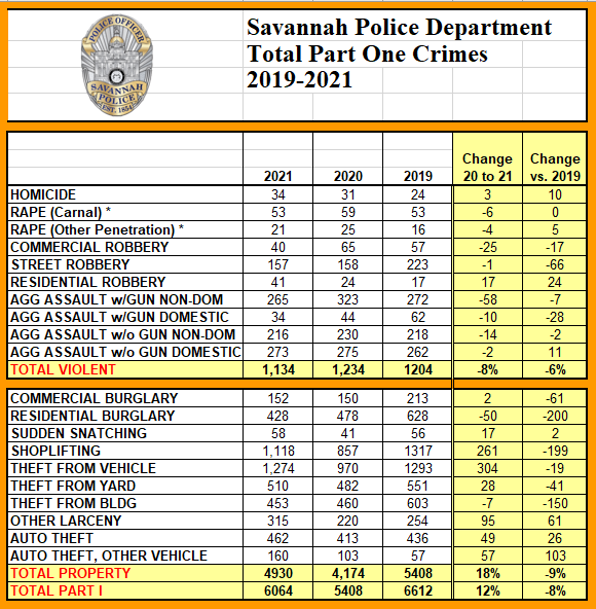 SAVANNAH, GA (February 25, 2022) – An analysis of crime statistics for 2021 revealed an 8 percent decrease in violent crime in Savannah.

“2021 was a challenging year for departments across the country,” Chief Roy Minter said. “In addition to continuing complications from COVID-19, law enforcement was dealing with staff shortages and an overall increase in violent crime. During this period, SPD worked diligently and strategically to address the factors that lead to violence in our community.”

Although the homicide rate has increased, the SPD Homicide Unit finished the year with an 88 percent clearance rate, which is substantially higher than the 64 percent national clearance rate. The City of Savannah also took a hard look this year at the varying factors that lead to violent crime, with a renewed focus on community engagement. To do its part in the new whole-of-government approach, SPD re-established the Savannah Impact Program, re-launched the Police Athletic League and continued a focus on appropriately addressing mental and behavioral issues through the Behavioral Health Unit.

Overall, gun theft and illegal gun possession remains an issue in Savannah. Savannah Police officers continue to stress the importance of gun owners properly securing their firearms in their home and especially in their vehicles. During 2021, 485 guns were reported stolen. More than 100 guns were attributed to entering autos, most of which were unlocked.

“We continue to stress to the public the importance of owner accountability when it comes to firearms,” Minter said. “If you have a firearm, make sure that it is locked and in a safe location away from children, but also that it is never left in an unsecured vehicle. Like every city in the country, we are experiencing a rise in these crimes of opportunity. In many cases the suspects go through parking areas and neighborhoods, pulling on car doors looking for an easy opportunity to steal personal belongings, money and other valuables often left in vehicles. Each of these stolen firearms on the streets poses a safety risk and could be connected to a new gun-related crime in our area.”