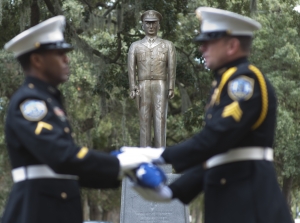 Peace Officers Memorial Day and Police Week is an observance in the United States that pays tribute to the local, state, and Federal peace officers who have died in the line of duty.

The SPD will hold its annual Police Memorial Day service at 9:30 a.m. on Wednesday, May 16, 2018 at the Police Officer Memorial on Oglethorpe Avenue.  A reception will follow.

To pay tribute to the law enforcement officers who have made the ultimate sacrifice for our country and to voice our appreciation for all those who currently serve on the front lines of the battle against crime, the Congress, by a joint resolution approved October 1, 1962 (75 Stat.676), has authorized and requested the President to designate May 15 of each year as “Peace Officers Memorial Day,” and the week in which it falls as “Police Week” and by Public Law 103-322 (36 U.S.C. 175) has requested that the flag be flown at half-staff on Peace Officers’ Memorial Day.

Each year, SPD honors those officers, and other law enforcement officers from the area, who have made the ultimate sacrifice for the safety and security of their community during its annual Police Memorial Day Service. The event is held  at the Police Memorial Park located directly across the street from the historic Savannah Chatham Metro P.D. Barracks on Oglethorpe Street.