The City of Savannah received a grant this week for $94,531, which will fund and expand the Savannah-Chatham Metropolitan Police Department’s Body Worn Camera program. 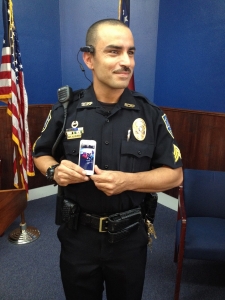 Currently all of the SCMPD’s patrol officers are outfitted with body worn cameras. This grant will increase the number of body worn cameras from 360 to at least 560, allowing detectives, sergeants and special operations officers to be able to wear and use the cameras.

Captain David Gay, Commander of Planning and Technology said the SCMPD is one of three law enforcement agencies in Georgia, with more than 25 officers, to receive the monies under the Body-Warn Camera Policy and Implementation Program.

As technology improves each and every year, so does the technology SCMPD relies on to help keep the citizens of Savannah safe. Initial research nationwide has shown that law enforcement use of body-worn camera programs improve law enforcement’s interaction with the public.

Officer body-worn cameras are relatively small devices that record interactions between community members (e.g., the public, suspects, and victims) and law enforcement officers. The video and audio recordings can be used by law enforcement to demonstrate transparency to their communities; to document statements, observations, behaviors, and other evidence; and to deter unprofessional, illegal, and inappropriate behaviors by both law enforcement and the public.

In total, the U.S. Department of Justice announced awards of more than $20 million to 106 state, city, tribal and municipal law enforcement agencies to establish and enhance law enforcement body-worn camera programs across the United States.

Under this grant announcement, BJA awarded more than $16 million to state, local, and tribal law enforcement agencies, as well as a $3 million supplemental award to continue support for body-worn camera training and technical assistance.