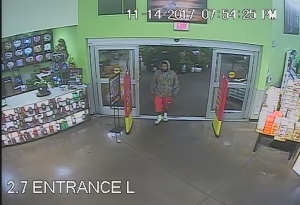 SAVANNAH, GA (November 15, 2017) – Metro detectives are seeking to identify a man who stole a Salvation Army Red Kettle from a donation area outside Kroger on Mall Boulevard on Nov. 14.

Officers responded to Kroger, 318 Mall Blvd., about 8 p.m. for reports of a robbery by snatch. Officers learned an unknown black male grabbed the Red Kettle while the Salvation Army bell ringer was looking the opposite direction and then ran away. Several witnesses attempted to chase the subject but lost sight of him in the area near Fox and Weeks Funeral Home.

The subject is described a bearded black male, who is possibly in his early 20s, average to stocky build and about 5-foot-6. He was wearing a camouflage jacket, red pants, white socks and black slides.

A video of the incident can be viewed at https://youtu.be/Oo1XvjnIQjA.