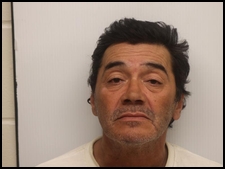 UPDATE: Savannah-Chatham Metropolitan Police Department officers arrested Efrain Sanchez for aggravated assault at approximately 9 p.m., Feb. 1, at a gas station in the 3200 block of Skidaway Road.  Sanchez, 58, is a suspect in a Jan. 21 cutting that injured Roosevelt Grant, 60, of Thunderbolt.

Roosevelt Grant, 60, was in front a business when a Hispanic male reportedly walked up to him and started an argument.  Grant said the argument escalated into a fight and at some point the suspect pulled out a knife. Grant was transported to Memorial University Medical Center with serious injuries.

SCMPD Officers and K-9 units responded, but were unable to locate the suspect.