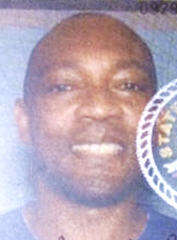 Samuel Eugene Johnson, 42, was reported missing from his home on the 1300 block of East 53rd Street.

Metro Police thank all who participated in the search.