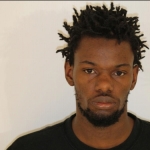 SAVANNAH, GA (December 23, 2014): One man has been charged and two accomplices are being sought after a Dec. 8 home invasion robbery in which a pregnant woman and her two children were threatened.

Eunricky Ramone Green, 25, has been charged with armed robbery, false imprisonment and parole violation after two males and a female forced their way into the apartment of a woman on the 1400 block of Barnes Drive about 2:30 a.m.

The trio demanded Christmas presents, cash and electronics after one of the men dragged the woman through the apartment by her hair. The female pushed a 5-year-old girl into her 3-year-old brother’s bedroom as they continued to ransack the house.

Green was arrested Dec. 15 at Savannah Impact Program. He was on parole after serving 3.5 years of a five-year sentence for attempted murder in 2010.

Violent Crimes detectives continue to investigate in an attempt to identify the other suspects.