SAVANNAH, GA (October 14, 2018) – The Traffic Investigation Unit is investigating an early morning single-vehicle crash that Injured two individuals.
At approximately 4:00 a.m., officers responded to a wreck at 41st Street and Atlantic Avenue involving a BMW Z4. They located a passenger, Brittany Key, 27, suffering from serious injuries. The driver, Jonathan Williams, 32, fled the scene, but was located shortly after. A preliminary investigation revealed that Williams was traveling east on 41st Street and attempted to make a right turn onto Atlantic Avenue. He failed to make this turn and struck a tree.
Both Key and Williams were transported to an area hospital with serious injuries.
This crash continues to be investigated by the TIU. 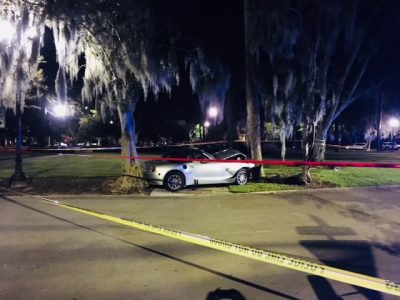