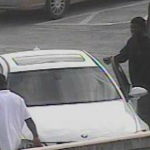 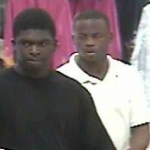 Have you seen these persons of Interest?

The theft occurred at Buckle in Oglethorpe Mall on the 7800 block of Abercorn Street. Investigators believe at least two males with hoodies pulled over their heads entered the store inquiring about a specific type of jeans. Once the jeans were located, the men grabbed several pairs and exited the mall. The men fled in a white 4-door BMW sedan.

Both suspects are described black males in their late teens to early 20s, standing between 5-6 and 5-10 and weighing roughly 150-170 pounds. During the incident one suspect wore a black hoodie with a green under shirt and black jeans. The second suspect wore a green and grey hoodie with light colored jeans.

Anyone able to identify these suspects should call CrimeStoppers at (912) 234-2020 or text CRIMES (274637) using the keyword CSTOP2020. Tipsters remain anonymous and may qualify for a cash reward.