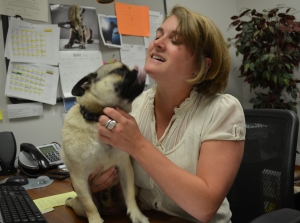 Scooter has a thankful slurp for Jessica Armstrong

SAVANNAH, GA (May 9, 2015) The worst day in the life of a pug-faced dog named Scooter actually may have led to his best.

The pint-size pooch left Savannah Friday night for a rescue facility in South Carolina where his useless hind legs will be fitted with wheels to allow his energy to again be released.

And he can credit his good fortunes to a secretary at the Savannah-Chatham Metropolitan Police Department Animal Shelter who couldn’t bear to see such “a happy little dude” euthanized.

Scooter was fighting for his life when a good Samaritan brought him to the shelter last Friday suffering from a broken back after being struck by a car on Canvasback Drive. Worried onlookers had followed him 100 feet into a wooded area off Fort Argyle Road to find him.

A leather collar with the word or name “Stud” hinted that he once had been someone’s pet, but no one came forward to claim him after the five-day waiting period. Worse, X-rays confirmed his back was broken and the legs he dragged behind him would not heal.

Usually, that combination leads to euthanasia, but Jessica Armstrong, the shelter’s administrative secretary, wasn’t buying it. Neither was the area rescue group One Love.

Armstrong teamed up with One Love to find a Pug rescue group and a benefactor to pay for the x-rays. One Love also helped ante up money for the transport to Lexington, SC, which eventually meant a ride in Armstrong’s car.

“I think it was his high energy,” Armstrong said. “He was way too happy (to be euthanized.) As far as he is concerned, he has no injury at all.”

As if to illustrate the fact, the fawn-colored Scooter scampered across the office floor forcing Armstrong to sprint after him to pose for a picture before packing up for the trip to Lexington on Friday. There he was to meet up with the Mid-Atlantic Pug Rescue which had identified a benefactor who would take him in and fit him with the wheels that would allow him to move freely and heed the call of nature without aid.

“We all love happy endings,” he said.