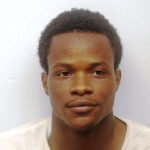 SAVANNAH, GA (February 26, 2016):  An anonymous tip form an observant citizen aided Savannah-Chatham Metropolitan Police Department’s Special Victims Unit in charging Theron Hendrix, 23, with rape and aggravated sodomy on Thursday, Feb. 25. This comes after the rape of a Savannah teen on Feb. 16 that occurred behind an abandoned residence on the 4400 block of Clinch Street.

At about 6 p.m. on Monday, Feb. 22, Central Precinct patrol officers responded to reports of a suspicious subject in the Clinch Street yard where the attack occurred. The suspect, identified as Hendrix, was arrested and charged with loitering and prowling as well as criminal trespassing.

Hendrix also fit the description of the suspect in the Feb. 16 rape. This prompted further investigation and a warrant service by Metro’s SVU on Feb. 25 at the suspect’s last known residence in the 1000 block of West 44th Street.

Following the warrant service, Hendrix was charged with the Feb. 16 rape. During the search, detectives also found possible links to the sexual assault of another Savannah teen, that took place in an alley on the 700 block of West Victory Drive on March 2.

From Aug. 25, 2014 to March 2, 2015, Metro’s SVU launched 6 investigations into prior sex crimes possibly involving the same suspect. SVU detectives continue to work closely with Metro’s Forensics Unit and the Georgia Bureau of Investigations Crime Lab. DNA and other forensic evidence are being analyzed to determine any links between Hendrix and the other sexual assault cases.

These investigations are ongoing. Anyone with additional information should call CrimeStoppers at (912) 234-2020 or text CRIMES (274637) using the keyword CSTOP2020. Tipsters remain anonymous and may qualify for a cash reward.