On Friday, Jan. 4 at around 5:30 p.m., officers responded to a call of a person with a gun at 32nd and Dieter streets. As officers responded, they observed individuals fleeing towards a residence on the 1500 block of E. 32nd Street.

A subsequent investigation led to the search of the residence, which resulted in the seizure of 15 pounds of marijuana, five firearms, cellphones and counterfeit currency.

The following day, on Jan. 5, task force officers responded to Allen Avenue and Winburn Street in reference to individuals partaking in criminal activity in the area. When officers attempted to make contact with the individuals, they fled on foot, but were quickly apprehended.

A total of five firearms were seized in this investigation, two of which were reported stolen.

“I commend the outstanding work of our task force officers, whose relentless dedication to combating violent crime has resulted in multiple arrests, the removal of firearms from convicted felons and the elimination of a large amount of drugs from our community,” said Chief of Police Roy Minter. “We will continue to focus in on the small number of individuals who account for the majority of the violent crime in Savannah. Our department is dedicated to making our City a safer place to live, work and visit.”

Jarquavious Pinkney, 20: possession of firearm by convicted felon, participation in criminal gang activity, possession of marijuana less than an ounce, obstruction by fleeing

Ken’Shawn Tankson, 19: possession of marijuana less than an ounce, obstruction by fleeing 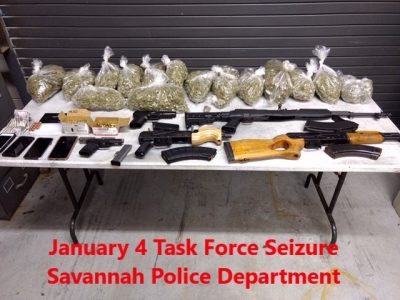