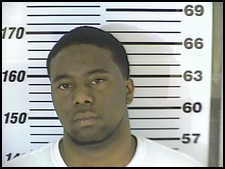 SAVANNAH, GA. (December 2, 2013): Savannah-Chatham Metropolitan Police are asking the public to help expand their search for a 21-year-old man they have charged with two counts of murder in a July 30 triple shooting on Savannah’s eastside.

David Randy Daniels Jr. has been charged with shooting to death 18-year-old Dominique Bright and 15-year-old Syheem Spaulding about 9:45 p.m. at East 39th and Cedar streets after a drug transaction. Daniels also is charged with aggravated assault for shooting a 15-year-old girl who was riding a bicycle nearby during the incident.

Violent Crimes detectives suspect Daniels has left the Savannah area to avoid arrest. He is known to frequent the Atlanta and Marietta areas and has contacts in the Carolinas and Florida.

Daniels is a black male who is about 5-foot-10 and 180 pounds. He is known to frequent Savannah’s eastside.He is considered armed and dangerous and should not be approached if identified.

Police are asking callers in the Savannah area to call Emergency 911 and those from outside the area call Crimestoppers at (912) 234-2020 or text CRIMES (274637). Tipsters remain anonymous and may qualify for a cash reward.