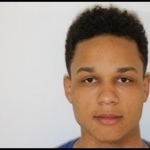 SAVANNAH, GA (August 18, 2016): Savannah-Chatham Metropolitan Police arrested Brandyn Johnson, 21, in the early morning hours of  Thursday, Aug. 18, charging him with multiple counts of assault, stemming from a property damage  report at a restaurant on the 4600 block of East US Highway 80 on Whitemarsh Island.

At about 2 a.m., SCMPD’s Islands Precinct patrol officers responded to reports of a nude man breaking windows at Five Guys Burgers and Fries and damaging several cars parked in the restaurant’s parking lot. Johnson, who fit the suspect’s description, was observed at the scene by responding officer. As officers approached, Johnson got into a car and drove away.

Metro officers stopped the car at Highway 80 and Twelve Oaks Lane. Johnson got out of the car and ran off into nearby woods.   The suspect reportedly broke-in to a residence in the 100 block of Twelve Oaks Lane where he physically attacked a resident, then returned to the woods. The resident sustained serious injuries from Johnson’s attack and was transported by EMS to the hospital.

Officers located Johnson in the wooded area. Johnson refused to follow officers’ orders, lunging at and attacking police as they approached.  Several officers were forced to utilize O.C. “pepper” spray, Tasers, and muscling techniques as a response to Johnson’s aggression.  Johnson also tried to remove an officer’s firearm and Taser.  Ultimately, multiple officers were able to physically subdue Johnson despite his rage.

Several officers sustained injuries, ranging from minor to substantial.  The officers were taken to the hospital with non-life threatening injuries.

It appears Johnson was under the influence of hallucinogenic drugs during these incidents.  He was also taken the hospital with non-life-threatening injuries and for detoxification purposes.

This investigation continues.  Anyone with additional information should contact the SCMPD tip line by dialing (912) 525-3124.